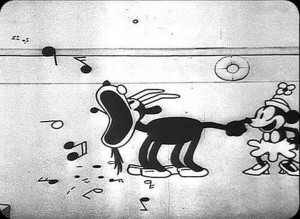 When looking back on American popular culture, many characters have had lasting impressions on the minds and lives of people, but few have had the impact or longevity that Mickey and Minnie Mouse have.

87 Years ago today, Mickey and Minnie Mouse made their debut to the American public at Universal’s Colony Theater in New York City in Steamboat Wille.

The short cartoon, directed by Ub Iwerks and Walt Disney, runs for little over 7 minutes, and greatly contributed to Walt Disney’s success. It was synchronized with sound effects, and received an amazing response upon its release.

Minnie is featured as the single passenger that Mickey picks up with a mechanical crane as Captain Pete pulls away from “Podunk Landing”.

The Mouse duo continues on to play “Turkey in the Straw”, a well-known folk song that dates back to the 19th century, utilizing various animals on the boat as musical instruments.

Despite many style changes that have been seen throughout the decades Minnie remains popular today. Flaunting the “Flapper” girl style of the 1920’s Minnie has embodied the style that was so progressive for women during the “Roaring 20’s”. Binky & Lulu believe that we embody progressive styling that help to empower woman to be who they truly are.  Woman who like Minnie aren’t afraid to buck tradition and follow their own style. B&L encourage women to embrace that same daring confidence with our meticulously curated collections.

Whether posing for pictures with families or starring in television shows, and movies Minnie has engrained herself in American culture, and today we say Happy Birthday Minnie. Thank you for your entertainment and style you have brought to us over the last 87 years!